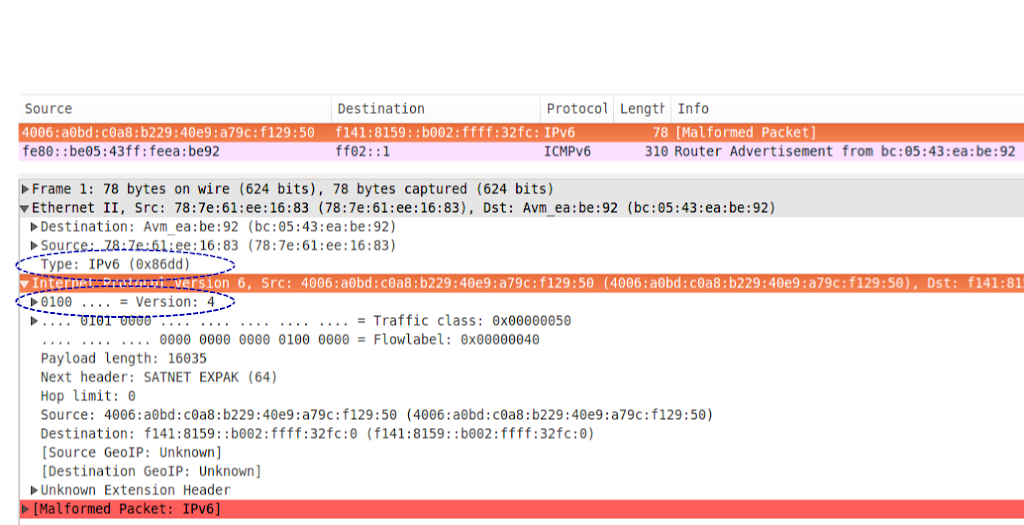 One thing that I enjoy a lot is capturing network traffic to subsequently try to figure out whether the captured traffic makes any sense — you learn a lot that way.

The following packet was shared with me by Timo Hilbrink during the 10th Slovenian IPv6 Summit.

The quiz consists in explaining the packet trace bellow.

So… can you explain what this packet trace is all about?

The solution to this quiz boils down to explaining the two packets in question.

Upon first inspection, the first packet looks like a malformed/corrupted IPv6 packet: the packet is truncated, has an IPv6 Source Address that does not really belong to the local subnet, and even has an unknown upper protocol (Next Header=64). Quite surprisingly, the second 32-bits of the IPv6 Source Address are c0a8:b229 which, if converted to decimal on a byte-by-byte basis, results in 192.168.178.41.

Is this just a coincidence? — Let’s look at the first packet a bit closer, with Wireshark:

Looking at the packet decode, it’s clear that while the Ethernet “Type” field is set to 0x86dd (IPv6), the IPv6 version field is actually set to version 4!

What we infer from this packet, is that the sending system (Apple iOS 8.3) fails to properly set the Ethernet Type field (i.e., bug #1). Hence, this IPv4 packet is identified at layer-2 as an IPv4 packet, and hence parsed as an IPv4 packet.

This is what the packet should look like (but doesn’t):

Now.. what about the second packet? How and why is it actually generated?

First of all, it seems that the Fritz!Box CPE fails to perform a very simple sanity check: that the IP version field matches the protocol type identified by the Ethernet header. In this particular case, they do not patch, and the Fritz!Box CPE should have discarded the packet rather than process it (i.e., bug #2).

That said, the Fritz!Box CPE seems to detect that the sending system is sending packets from an incorrect IPv6 prefix, and hence sends a Router Advertisement message with a Prefix Information Option (PIO) that advertises the corresponding prefix with a preferred lifetime of 0 — in the hopes that this prefix is “disabled” in the sending system. This seems to be some sort of feature of the Fritz!Box CPE that aims to mitigate e.g. misconfigurations. Obviously, in this particular case the RA sent by the Fritz!Box CPE will be of no use, since the sending system is not really employing the 4006:a0bd:c0a8:b229/64 prefix — it is simply sending IPv4 packets with an incorrect Ethernet Type (0x86DD rather than 0x800).

So… what’s the real IP packet that is being sent by Apple iOS 8.3? If we overwrite the incorrect EtherType of the first packet with 0x0800, and now decode the first packet again (such that it is decoded as an IPv4 packet rather than as an IPv6 packet), the output is:

That is, the first packet of the packet trace was really an IPv4-based TCP SYN packet, which obviously looked like a malformed IPv6 packet when “incorrectly” decoded as an IPv6 packet.

Folks willing to take a closer look at the packet trace may find the corresponding pcap file here. The “corrected” pcap file (with the EtherType overwritten with 0x0800, such that the first packet is decoded as an IPv4 packet) can be found here.

A Proposal for Generating Stable Privacy-Enhanced Addresses in IPv6

This may be a good place to introduce yourself and your site or include some credits.